Let us help you.

Writing Adoption Reference Letters Aug 18, 2015
Adoption Reference Letters - How To Dec 18, 2015
What Names Do You Put In The Aka Or Alias Section Of Forms? Mar 22, 2016
Adopting a Relative Child Internationally Jul 12, 2016
Becoming the Guardian of a Child in Pakistan and Bringing a Child to the United States Mar 21, 2019
Categories | Subscribe | Populars
Written by Jessie McNaughton
on May 17, 2016

While researching adoption, you will have come across a multitude of terms that are unique to adoption and may be new to you.  Understanding these terms will help you whether you are a birth parent, adoptive parent, adoptee or family member. 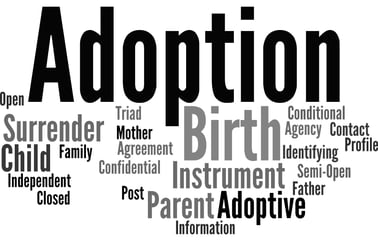 One major key to a successful adoption journey is knowledge.  Below is some common adoption vocabulary to help you understand the adoption process better.

Family Connections, Inc., is a not-for-profit, New York State authorized private adoption agency who has been caring for families through domestic and international adoption since 1994. We are dedicated to supporting birth parents, adoptive parents, and children touched by adoption throughout the life-long journey of adoption.

Let Us Know What You Thought about this Post.

Open Adoption - Why is it a good choice for the birth mom?

A Birth Parent's Question: Will My Baby Love Me?

Will my baby love me if I place him/her in an adoptive home? This is a question that almost every birth parent asks or t...

There is always more to learn when it comes to adoption!